It was during these years – difficult years – that Nazareth House was established.

Difficult years? Awakening the ‘sleeping giant’ of the Orthodox establishment to a new reality seemed to be an impossible task:- that Australians wanted to hear and comprehend the Faith of our Fathers in their own language!

Unable to find space among the seemingly immovable rocks of liturgical languages (ancient forms of Greek, Slavonic, and Arabic), Nazareth House began conducting services of the Church in English, and without the embellishments associated with specific ‘old country’ ethnicities.

The founding principles of the Mission were established and a visible expression of Australian Orthodoxy began then.

And, to God be the Glory, people came!  Many people: Orthodox clergy, lay people, seekers, inquirers and those needing the wisdom of our beloved monk.

And the message of salvation was sought by the spiritually thirsting non-Orthodox: Pentecostals, Baptists, Church of Christ and Roman Catholics. 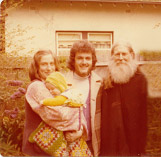 Fr Lazarus is now regarded as one of the great missionaries and scholars of the 20th Century. His translations of the Orthodox liturgical books (the Church Services, the Psalter and the Four Gospels), books such as The Ladder, Life of St Seraphim of Sarov, The Arena, and many others, have opened the doors of the Church to countless people, not to mention all those in the household of the Faith.

The work of Holy Cross Mission is a product of the pioneering efforts of Fr Lazarus in Australia who was adamant that the universal faith and all its services must be presented in the language and cultural setting of the nation it finds itself in.

The mustard seed sown by Fr Lazarus and that small young family has grown and the fruit is abundant, stretching from Melbourne to Indonesia and beyond.